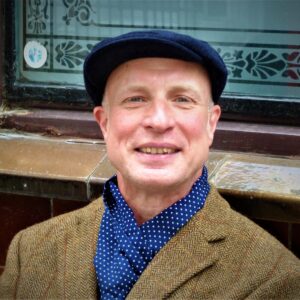 Many locations in London can lay claim to being central to the birth and history of British Punk Rock. Did this musical and cultural earthquake, which had such an important and far-reaching effect back in the mid- to late nineteen seventies start in Chelsea, Soho, Camden or Covent Garden? There is probably no definitive answer to this question, but Camden Town certainly has a strong case for being considered right up there with the most important locations. In this blog I am going to have a look at some of the places in Camden that played such a key part in this musical and cultural revolution.

Where it all started – The Roundhouse

In the nineteen sixties, The Roundhouse, an old railway building on Chalk Farm Road, had hosted a number of groovy happenings, all night hippy freak outs, headlined by bands such as The Pink Floyd and The Doors. By 1976 h,owever, many young people had grown bored with peace and love, flared trousers, long hair and so-called prpogtressive rock, and were ripe for a cultural change. On 4th July 1976 an event took place at the Roundhouse which is considered by many to be the first Punk Rock gig to have taken place in London. New York band, The Ramones, made their first live appearance in Britain, supporting The Flaming Groovies.  The concert was sold out and, for many, hearing the short, sharp songs, played at breakneck speed, would be a musical epiphany.  From then on, The Roundhouse cemented its reputation as a venue prepared to take artistic risks by allowing bands such as The Damned, The Stranglers and Xray Spex to perform there, when many other music venues were scared off by the rather unsavoury reputation that the media had established for this new wave of young bands. Punk Rock had arrived in London.

The Clash in Camden

The Clash were second only to the Sex Pistols in London’s Punk hierarchy and were destined to outlast, and, some might say, even surpass them. When they first formed, they rehearsed in a disused storage building in the old Camden Stables, then a filthy dilapidated British Rail goods yard, and now the Cyberdog Shop, home to Camden’s dayglo techno scene. When not rehearsing, the band would explore the musty, crumbling tunnels beneath the Victorian warehouse with fellow musicians from the New Wave group The Subway Sect, who also learned their craft in Camden Town. It was right here, in what is now The Stables Market, that The Clash wrote many of their early songs, iconic tracks such as ‘London’s Burning’ and ‘White Riot’ that featured on their seminal debut LP. These songs would have been directly influenced by the dereliction that surrounded them on Chalk Farm Road. Indeed, Camden Town gets namechecked in the lyrics of no fewer than three Clash songs.

Across the way from the rehearsal rooms, there was a horse ramp, now stairs, running up the side of what was once a tack room, and it was on this ramp that the iconic cover of the first Clash LP was photographed. If you hang about here long enough, you will see men of a certain age having their photo taken while copying the cover poses of Clash members Joe Strummer and Mick Jones, and trying to recreate those heady days amongst the colourful tourist spectacle that is Camden Market.

This legendary venue opened in 1973. It had previously been a run-down packaging warehouse located next to The Regents Canal, in what is now Camden Lock Market, It was an ideal place for loud music to be played as the building had very few windows, which made for a well sound-proofed performance space. After a couple of years, the dance hall had its own resident band on Thursday nights, Kilburn and The High Roads, who went on to become punk fellow travellers, Ian Dury and The Blockheads. The Stranglers even namechecked the venue, singing about ‘Dingwall’s bullshit’ in their debut single ‘London Lady’. It was here that The Stranglers and The Clash were involved in fisticuffs, which would affect the way The Stranglers, Britain’s biggest selling punk band would be reported in the British music press for years to come.  The Stranglers had just come off stage at Dingwall’s, having supported the Ramones here in late 1976, when, legend has it, a member of The Clash spat at them, and, in true punk style, it all kicked off. On one side of the car park were various members of The Sex Pistols, The Clash and assorted journalists, and on the other were The Stranglers and their infamous followers, The Finchley Boys. Although the skirmish only lasted for seconds, the music press never forgave The Stranglers for the incident (and for being over 25 years old!), and spent the next ten years bearing a grudge against them. These things can happen after a night out in Camden Town!

The building which eventually became The Electric Ballroom, located next to Camden Town tube station on Camden High Street, first opened as a music venue back in 1938. Having started life as a masonic lodge, in 1938 it became an Irish ballroom called The Buffalo Bar. It became a rock venue in 1978 and was the location of the last ever British gig by the notorious Sex Pistol, Sid Vicious, who played here in order to raise money for his, and his girlfriend, Nany Spungen’s, air fares to America.  Sadly, Sid and Nancy got on their flight to America a few weeks later but within a couple of months would both be dead. On a brighter note, the Electric Ballroom hosted a showcase for local record label Two Tone in 1979, the line-up consisting of The Specials, Dexy’s Midnight Runners, and, the band who would become Camden’s very own house band, Madness.

In 1977, the year that punk came out of the shadows, The Camden Theatre, just over the road from Mornington Crescent tube station, became known as The Music Machine and hosted some classic punk gigs. You could still tell that it had once been a theatre, it had a certain plush seediness about it. It was all dimly lit balconies, bars and twisty staircases. Imagine the sweat, noise and pogoing when, in 1978, The Clash played a four-night stint here, having turned down an offer to play at the prestigious Hammersmith Odeon in order to do so.  This venue is now known as KOKO and is currently being refurbished after a fire broke out there in January 2020.

Punk rock had a far-reaching impact on British culture, but, by 1978, it was all over. This does not mean that its influence disappeared, however; its impact on Camden can still be felt today, over forty years later. Just this week I spotted the example of street art shown below on Camden High Road. Tacky Sex Pistols T-shirts can still be bought in the market and young men with big Mohican haircuts and studded leather jackets ask tourists to ‘help a punk get drunk’ by paying to have photos taken with them. I wonder what the young kids who saw The Ramones at The Roundhouse back in 1976 would make of it all?

Gilbert, Pat (2005). Passion is a Fashion: the real story of The Clash. Aurum Press.

Featured image and all other images taken by Jeffrey Prior.